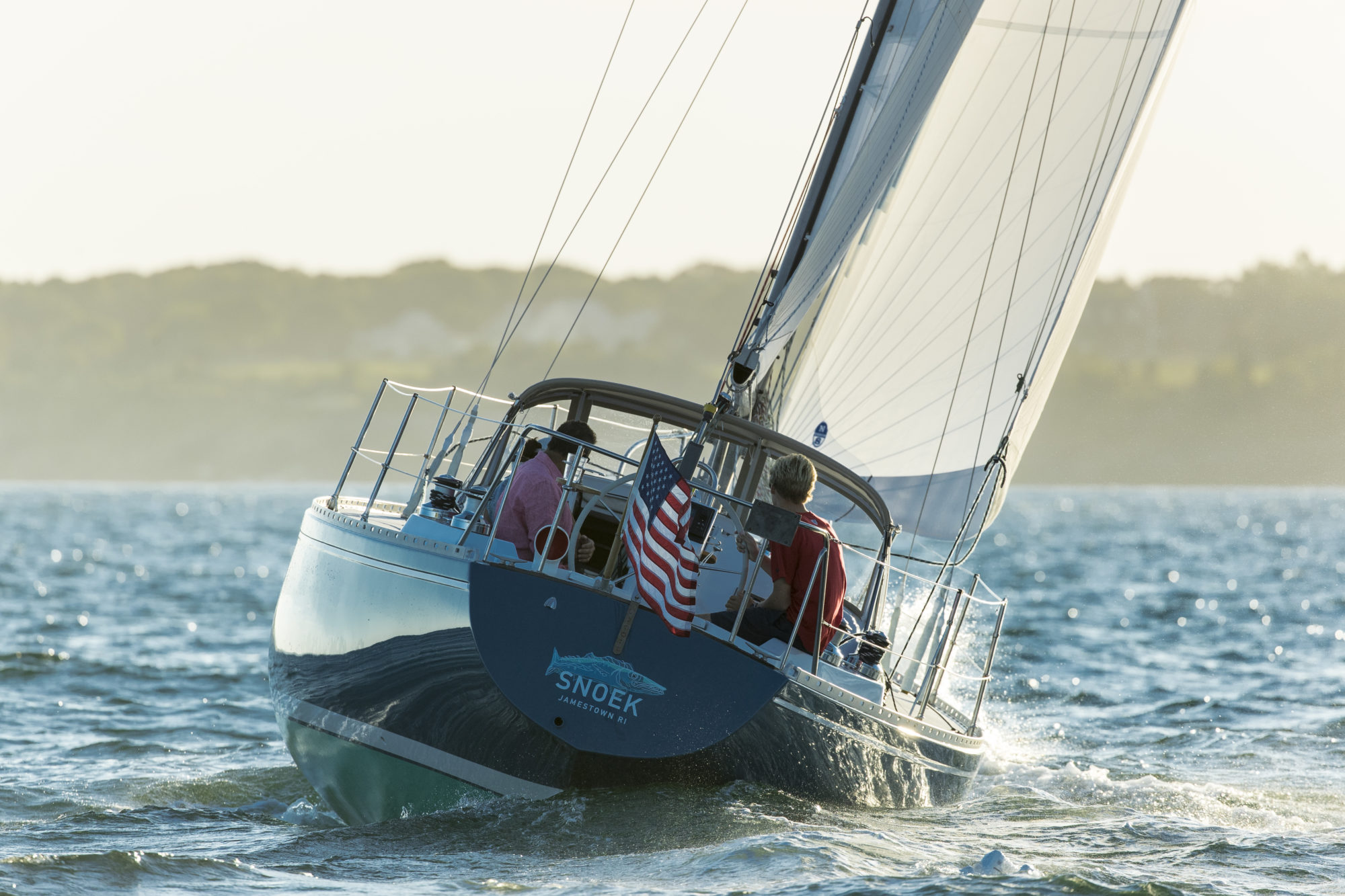 Onne Van der Wal’s Pearson 36 didn’t always shine as she does now. Before she was Snoek, she was tired and tangled on her mooring in Newport Harbor. Now, she’s a gem of the New England cruising scene, but it took months of hard work and grit to get her up to speed. Onne’s PBS documentary chronicling the restoration of Snoek is now airing in select cities, so we caught up with the famous yachting photographer and cruiser to learn about his experience and how he upgraded his performance with new North Sails.

North Sails: Why did you choose to work with North Sails?

Onne:  I was doing an early morning photo shoot over at Dutch Harbor, and I hear a bicycle come down behind me and it stops, and it’s Dan Neri, CEO of North Sails Group. I said, “I was going to give you a shout. I’m rebuilding an old Pearson, and I wanted to talk to you about working with me on it.” And he said, “Deal. Count me in ” And that was literally the conversation. Well, from Dan that’s a lot. And that’s all I needed to hear– the confirmation and the thumbs up.

And so I got back in touch with him, and arranged a sail with Dan and cruising expert Bill Fortenberry. We sailed around the bay and they measured everything and looked at every detail, and took pictures. Dan got very involved in the design process. With the old sails, the boat had a lot of weather helm, and I told Dan this. The sails were too deep, and the main– there was just too much power. So, they got me set up with a brand new set of Radian sails.

Everything arrived during the winter, all boxed up from Sri Lanka. We laid them out on the lawn and had a look, and it was ‘oohs and aahs.’ When the boat was finished and put in the water, it was just Bill and me, and my daughter to test them out. The three of us hoisted the sails and immediately noticed that the new main was a lot flatter. And even then if you put a reef in, oh my goodness, it’s even flatter– it’s just great. They fit beautifully. And we went sailing and we were all pretty psyched. 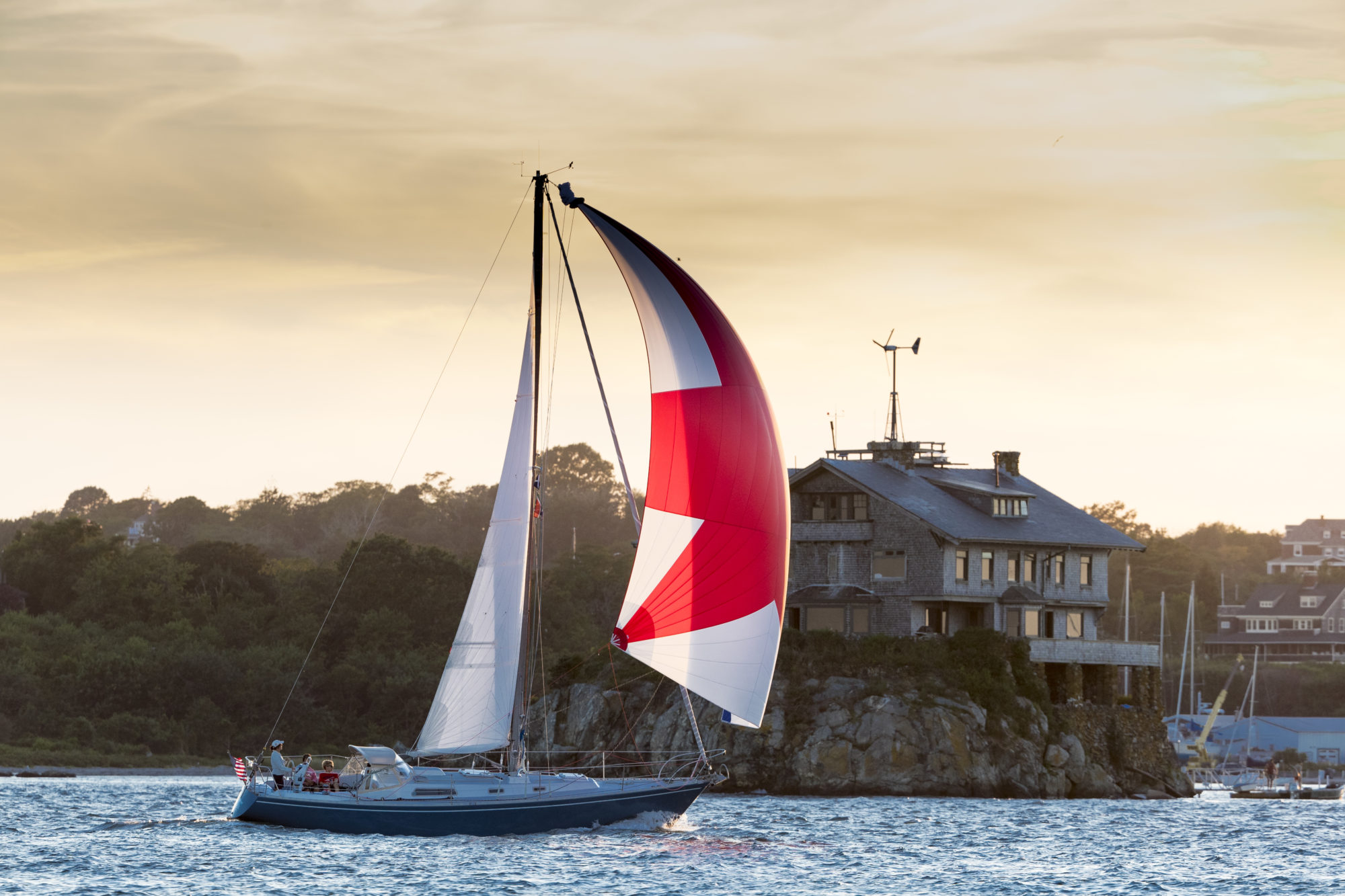 North Sails: What made you choose Radian sails?

Onne: I just think that the weight of the cloth is so manageable.  I sail with my wife and my wife’s not a huge sailor, so she normally stays in the cockpit. I have a stack pack with lazy jacks to store the main. The fabric is pliable enough that I can just drop the halyard and the sail, and it literally falls all the way down into the bag onto the boom. From there, I can just pull the leech a little bit aft, and it flakes nicely into the bag. It is just such a big advantage to have that nice, soft pliable workable fabric. Yet when we’re sailing with that main up, and we’re hard on the wind, in let’s say 17-18 knots of breeze–I mean the main looks beautiful.

My headsail is a 135%, and has a nice high clew and a foam luff. We were coming back from the vineyard the other day in a southwesterly, and it was a fetch home. So we cracked off, but not tons, and with a nice high clew like that, the bow stayed above the waves. When we had furled the sail a bit to minimize the sail area, it looked nice and was perfect for shorthanded cruising sailing. Just perfect.

The red and white gennaker that we have, it’s just so easy to fly. I do it on my own. I just tack it down on the bow and pull it out. I preset the sheets and can hoist from the bucket bag right there. he launching tube with a bucket and a nylon tube,  I just hoist away. and bingo.  As soon as I’m ready to let it go, I just make sure it’s a little bit in the lee of the main, and I trim on the sheet a bit. I pull the bucket down and I lash the bucket to the deck, and then when I’m ready I drop the halyard, it’s easy. That’s how cruising should be. Nice and easy, and no stress.

North Sails: Tell us about choosing Radian over something sporty like 3Di?

Onne: Some members of my family gave me a hard time for not going with 3Di and all that kind of stuff. And I said, “I am a cruiser who prefers to use traditional sail materials. I take them off the boat and fold them up. I like traditional materials like Dacron too when it comes to trimming. For me, they are easy to handle, hoist, and trim.

North Sails: What was the best part of the new sail process?

Onne: I’m very happy with the service I received. Having gone for that first sail with the old sails, and how extensively the Dan and Bill measured everything, looked at everything, and checked where the leads were ideally placed made the entire experience worthwhile. When the sails arrived, nothing needed to go back to the loft. It was bingo– out of the bag it fit, and when I trimmed it on and cranked the halyard, it looked good. 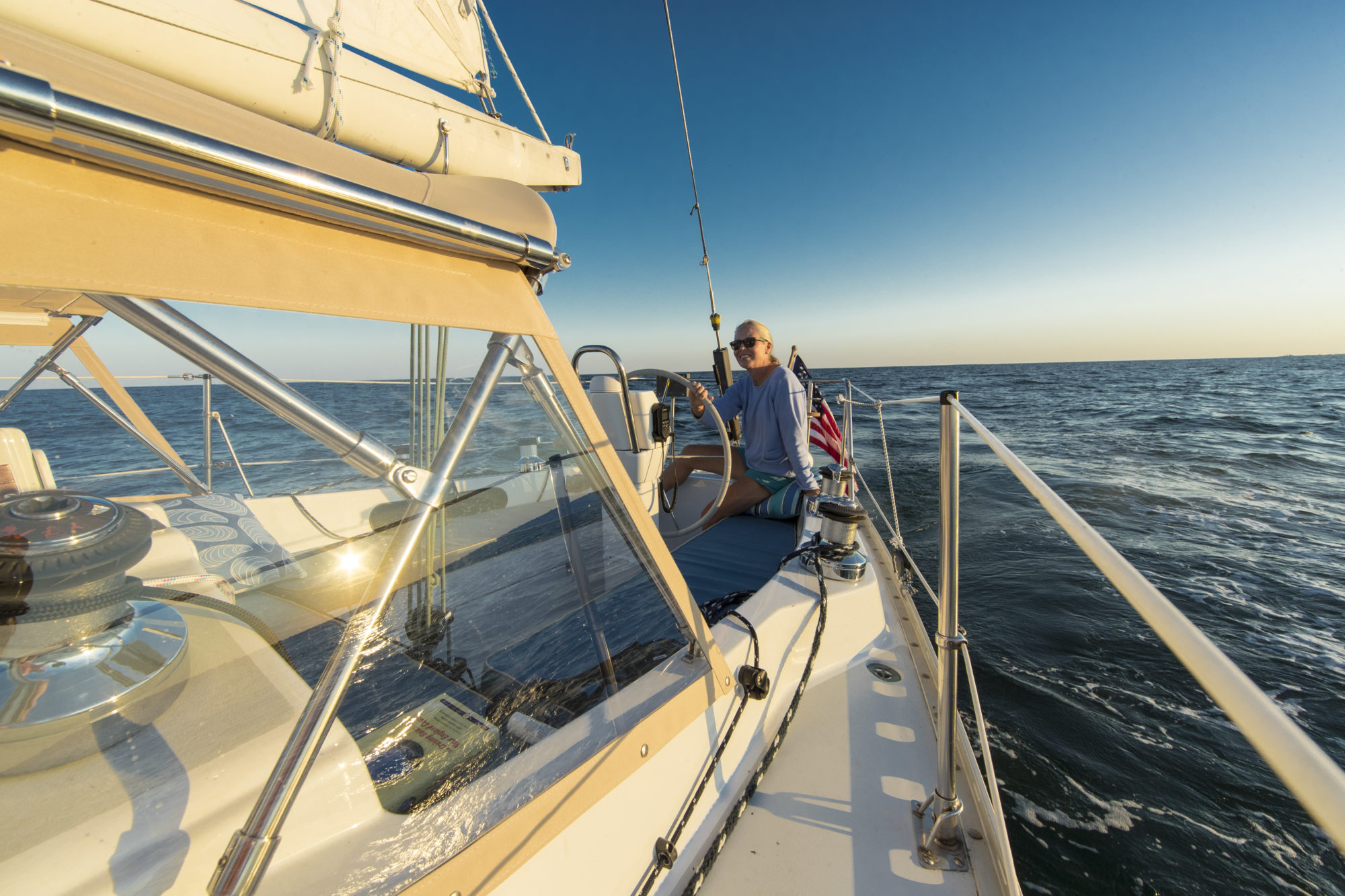 North Sails: What is the best trip you’ve ever taken onboard Snoek?

Onne: We did a trip two years ago and we sailed to Block and from Block, we sailed down to Shelter Island. We sailed in about 20 to 25 knots easterly, so it was DDW. We deployed our full jib and a full main. And I have a nice carbon pole on the boat, so I ended up pulling out the headsail. And we just made super good time and surged up to about nine and a half knots. For an old heavy cruising boat from 1972, to do nine knots was pretty remarkable with the three of us on the boat. When we got to Shelter Island, we poked around and then we sailed across to Stonington, CT. We tacked up the coast from Stonington to Watch Hill, RI in a northerly, and had a beautiful and fast beam reach all the way along the south shore of Rhode Island. As we got to Watch Hill, the wind shifted the west. So as you can imagine, we’ve got a beam reach to Point Judith. The wind clocked around to the west and we had another reach up Narragansett Bay, all the way home.

My wife said to me, “You know, this sailing stuff is pretty comfortable and easy.” I think that trip from Block to Shelter Island to Stonington and back just epitomized perfect sailing, and having the right breeze and the right sails– it was just so comfortable and so fast. We’ve had a lot of nice sails on the boat, but these stand out the most. 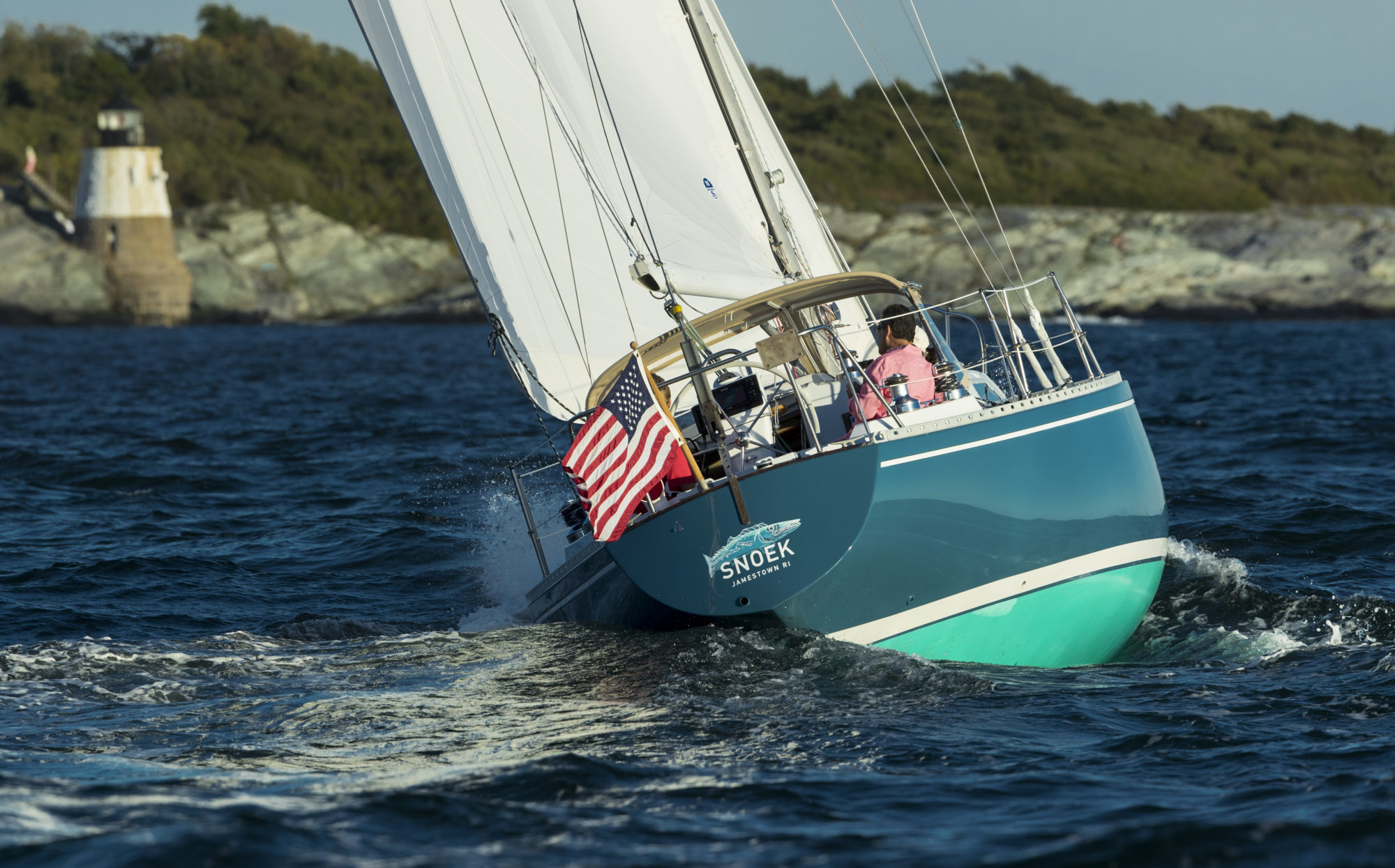 North Sails: Any behind the scenes you can share with us on the PBS documentary?

Onne: North Sails President Ken Read said in a documentary, “What is Onne tackling? I mean, that’s so much work.” And yeah, it was. It was a long winter spent restoring Snoek. I enjoy working with my hands, and I’m fortunate that I went to trade school to learn how to do boat work. But more than that, it was a very rewarding project to grab an old boat from 1972 that was borderline dump material. It could have so easily gone the other way, where somebody said, “This boat, it’s done, it’s not worth anything. We should just scrap it.”

In February when it was dark and cold, I thought “What the hell am I doing?” But I just knew what I was heading for and what I could do with it once it was completed. We’ve had some amazing experiences.  Everywhere we go, I always take my camera, and early in the morning or late in the day, I end up mostly going for a sail on my own or with one of my family members, and we go and take some nice pictures of where we are.we’ll take a rod with us sometimes and fish a bit too.

For my photography, I’ve been able to grab some really nice images of New England, Shelter Island and Nantucket, and everything in between. One thing, when you go and do an assignment and you stay ashore in a B&B or a little hotel, you’re a little stuck and then you’ve got to get a ride or you’ve got to find a little boat or whatever to go and shoot. But when you’re staying on the boat, and wake up in the morning at sunrise and look up at portlight, you say ‘damn, it’s bloody perfect’. There’s no wind, the sun is beautiful, there’s a little bit of a cloud. I just say to my wife, “I’m going to go shoot, see you later.” And I jump in the dinghy and I go and shoot. Because you’re literally sleeping on location, I mean, you’re sleeping where it’s all happening. And just with one eye open, you can see if it’s worth getting up or not.

We’ve enjoyed it very much. And quite honestly, I’ve sailed all over the world in many different places and I think we live in one of the most beautiful cruising spots in the world. It’’s been a very worthwhile thing to restore and save this old boat and be able to fix her up and enjoy every moment.