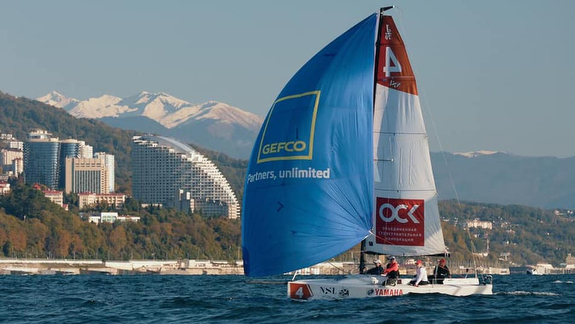 (Sochi, Russia)- Two-dozen teams from across Russia assembled in Sochi, Russia to sail the 2019 Russian J/70 National Championship. The Sochi Grand Marina by Burevestnik Group hosted the three-day event. After a ten race, two discards series; it was Alexander Bozhko and his amazingly fast crew on AKHMAT that were crowned as the Russian J/70 National Champions.  Here is how it all went down on the choppy waters of the Black Sea off the Olympic city of Sochi. 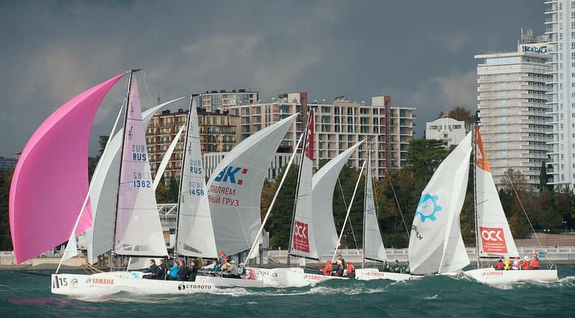 Day 1
Included in the 24 teams that started the Russian J/70 Nationals were many of the past few year’s leading teams. Remarkably, there were five women skippers (the most ever in a major Russian sailing event) participating; including DOLCE VITA (steering Inna Balashova); ARTTUBE RUS1 (Valeria Kovalenko); TREM SAILING 1 (Alexandra Peterson); TREM SAILING 2 (Irina Sorokina); and MATRYOSHKA (Natalia Kravets).

Sochi is one of the favorite sailing areas for Russian sailing events. Nevertheless, this was the first time the J/70 Class held their Russian National Championship in the Olympic capital city.

The first race day turned out to be quite complicated, despite the forecasts foreshadowing the complete absence of wind and heavy rain. Fortunately, neither of them happened. But, unfortunately, a quiet wind set at 50-60 degrees, which twice led to race postponements right after the start. In the end, two races were held in the light northeast winds offshore.

Leading after the first day was Alexander Bozhko’s Chechnyian crew aboard AKHMAT; they had only 4 points in 2 races. The second and third place teams were tied with 7 pts each- the twin teams of M Sailing Team (Andrei Malygin) and M Sailing Team CSKA (Mikhail Poslamovsky). Sitting in fourth place just one point back was top woman helm Natalia Kravets on MATRYOSHKA. Fifth place also had a tie at 9 pts each- Peter Nosov’s CARAMBA and Zoran Paunovich’s ZID art Sailing team. 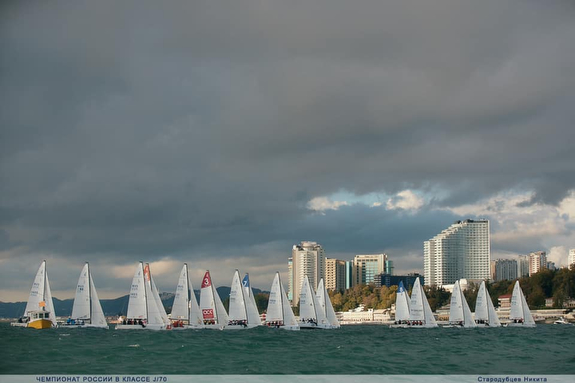 Day 2
For the second day of sailing, Sochi weather was again distinguished by its inconsistency. Contrary to expectations, the wind was not stable enough.

The Chief Judge of the regatta- Nikolay Yushkov- commented, “the day started very well. In the first two races, the southeast wind blew a steady 15 knots. We were glad that the races were longer, each taking about an hour. In the middle of the day, the wind changed its direction 180 degrees! Then, we waited a couple of hours for the wind to settle. Amazingly, the wind returned to his original southeast direction, and we were able to run two more races.”

As a result, four more races were added to the results for a total of six races to score. Further increasing their lead was Bozhko’s Chechen Republic team on AKMAT after posting two 1sts and two 2nds! However, close friend and archrival Valeria Kovalenko on ARTTUBE RUS 1 had an amazing day, posting two 1sts and a 3-4 to race up the standings into second place! Rising to third place was Malygin’s M-SAILING team. 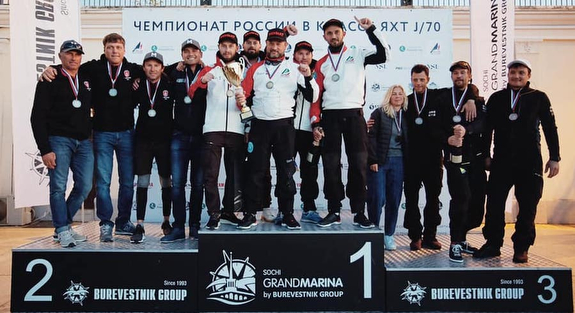 Day 3
The final day of the regatta turned out to be a sight for sore eyes- a stable wind of up to 8 knots made it possible to run four more races, to make it ten races in all. Coincidentally, the teams could now discard their two worst results.

Chief Judge Nikolay Yushkov commented, “we had a great day! The sun, warmth, stable southeast wind- all the components for high-quality sailing! It is a pity that the day was shortened, otherwise they would still be racing, with big smiles on their faces!. Congratulations to the winners and prize winners!”

Crowned as the 2019 Russian J/70 National Champion was the team from the Chechen Republic on AHKMAT. Bozhko’s team sailed a phenomenal regatta, winning with just 17 pts total and not having to sail the last race! Rising to the challenge of maintaining a podium position was Malygin’s M-SAILING Team, taking the silver over Kovalenko’s ARTTUBE RUS 1 Team, who finished with the bronze medal.